A bizarre scene unfolded inside Wells Fargo Center on Friday night after the 76ers’ 110-102 win over the Bucks, in which Milwaukee superstar Giannis Antetkounmpo tried to shoot extra foul shots after a terrible game and an opposing player interrupted by taking the ball and refusing to give it back.Antetokounmpo, a two-time league MVP, was a dismal 4-of-15 from the charity stripe during the game, which was the worst performance from the line of his career. He returned to the court as the 19,769 fans were filing out, and, after some trouble finding a ball to shoot, took seven practice free throws and made them all.That’s when things got weird. Sixers bench player Montrezl Harrell came over to where Giannis was shooting, took the ball and stood in the corner.“This isn’t f—— Milwaukee,” Harrell barked at Antetokounmpo, as witnessed by The Athletic. “Get that s— out of there.”Antetokounmpo, according to witnesses, offered to Harrell to join him in the shooting drill, and when he wouldn’t, pleaded for the return of the ball. A Sixers’ staff member who had accompanied Harrell, skills coach Jordan Love, then stood between the two players and told Antetokounmpo he could not have the ball back, and could not shoot on the court.Antetokounmpo left the court and returned with two basketballs. Only when he came back, a Wells Fargo Center employee pushed a large, A-frame ladder in front of the hoop where Giannis was shooting. Antetokounmpo asked the man to move the ladder so he could finish his shooting, and twice the man said no.Now angry at the surprising circumstances he was facing, Giannis attempted to push the ladder out of the way, and it tipped over, crashing onto the court.As Antetokounmpo took a few more practice shots, Harrell was at the other end of the court, shooting and screaming back toward the Bucks’ side.“Yeah I took the ball, get the f— outta here,” Harrell said, as Giannis shouted from his end: “I’m doing my f—— job.” 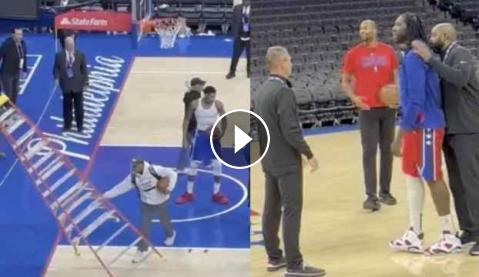 A bizarre scene unfolded inside Wells Fargo Center on Friday night after the 76ers’ 110-102 win over the Bucks, in which Milwaukee superstar Gia...